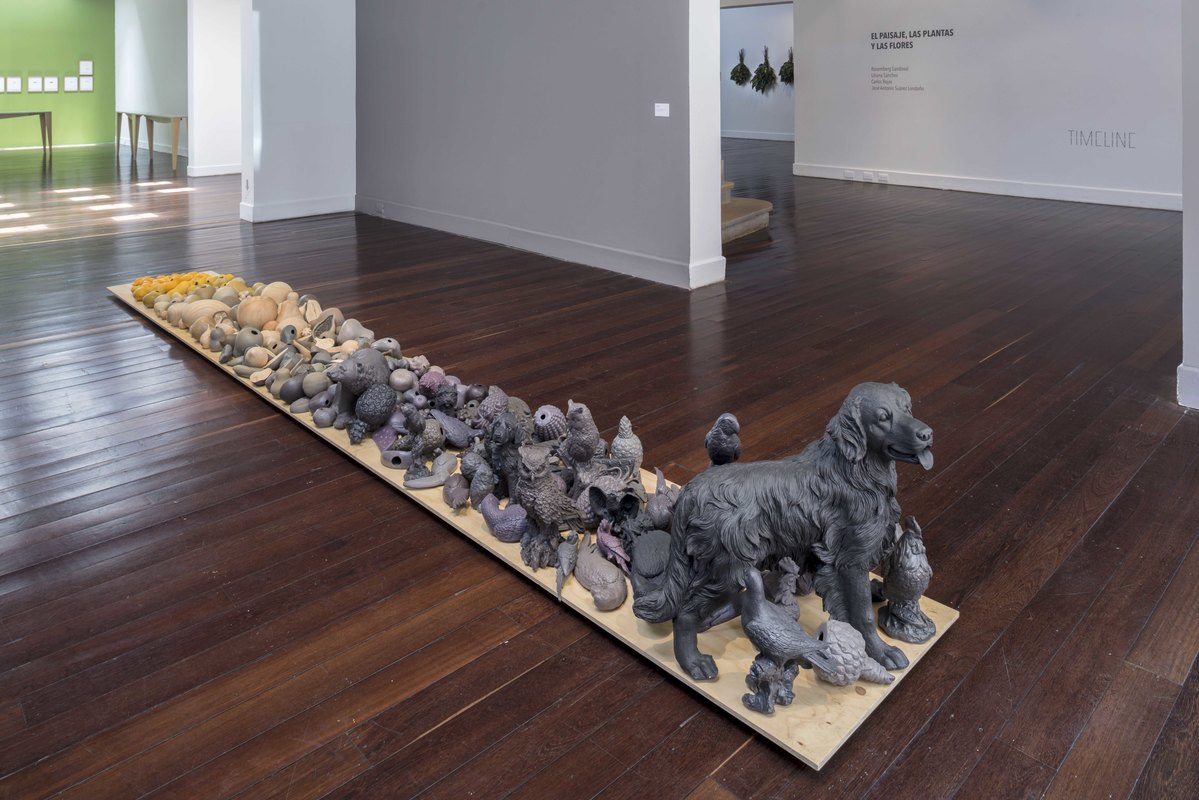 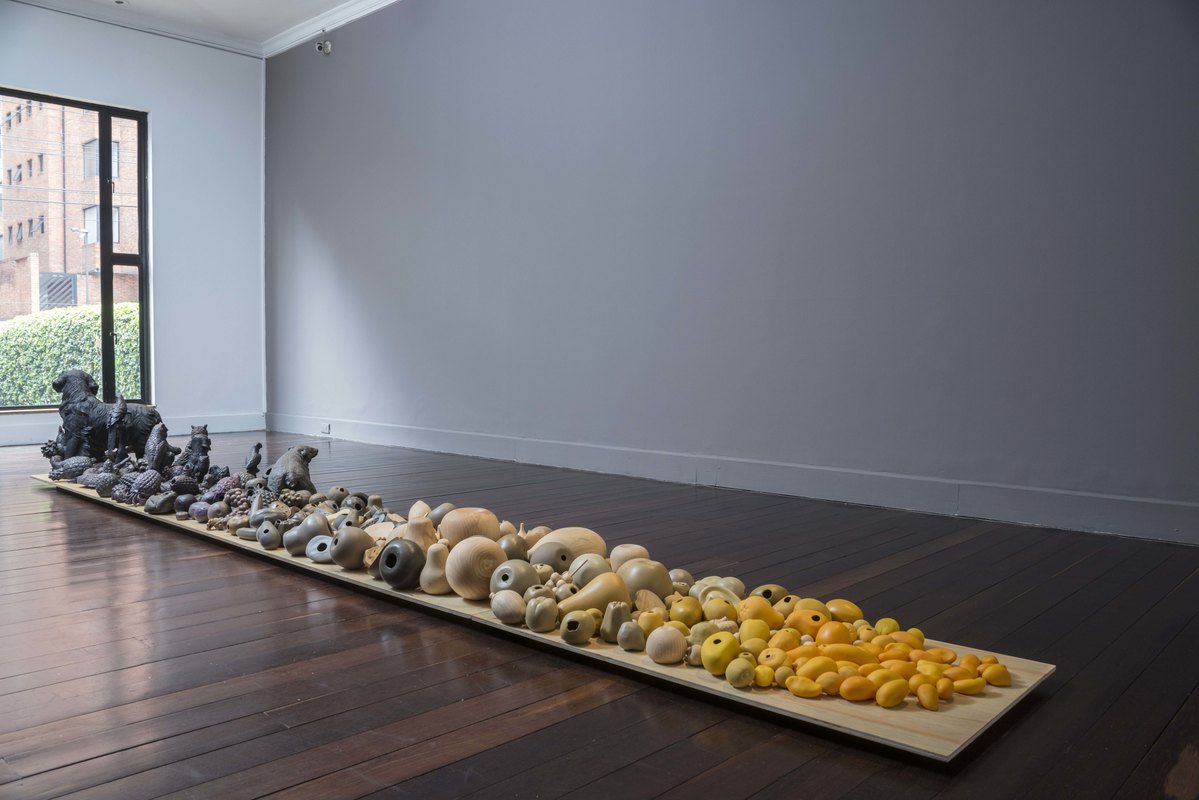 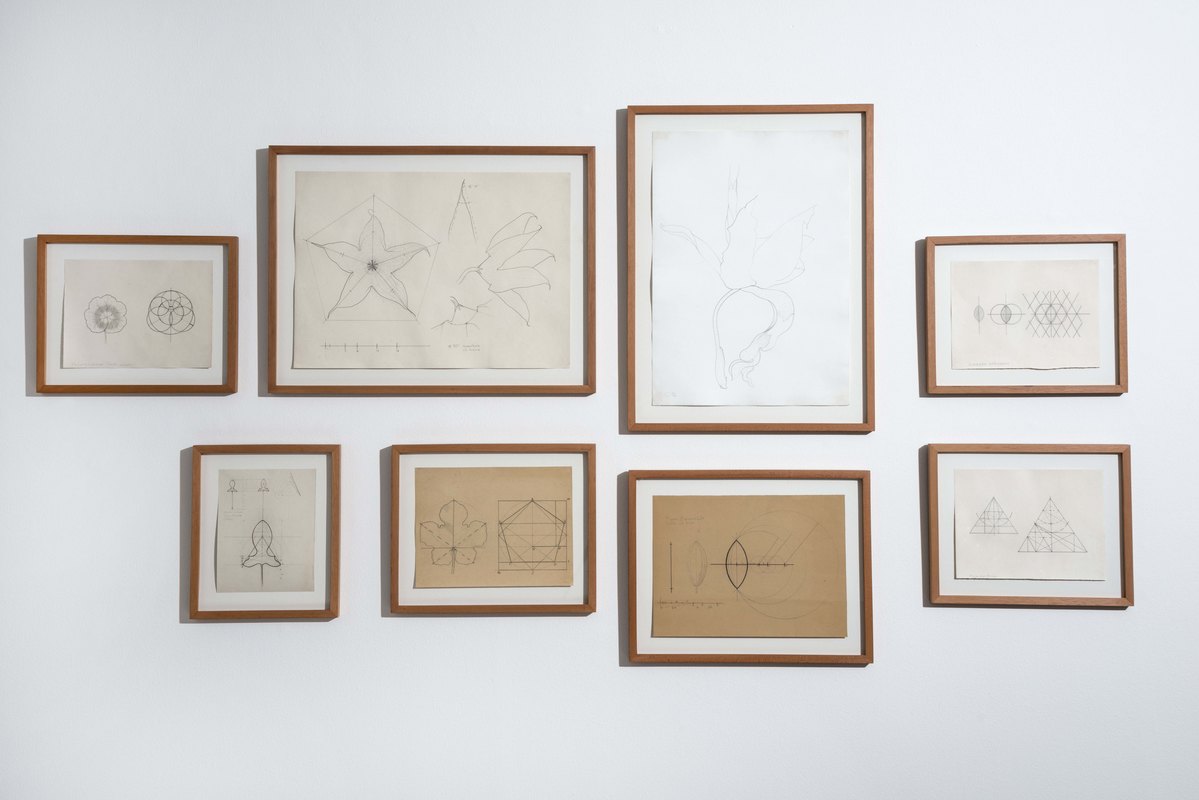 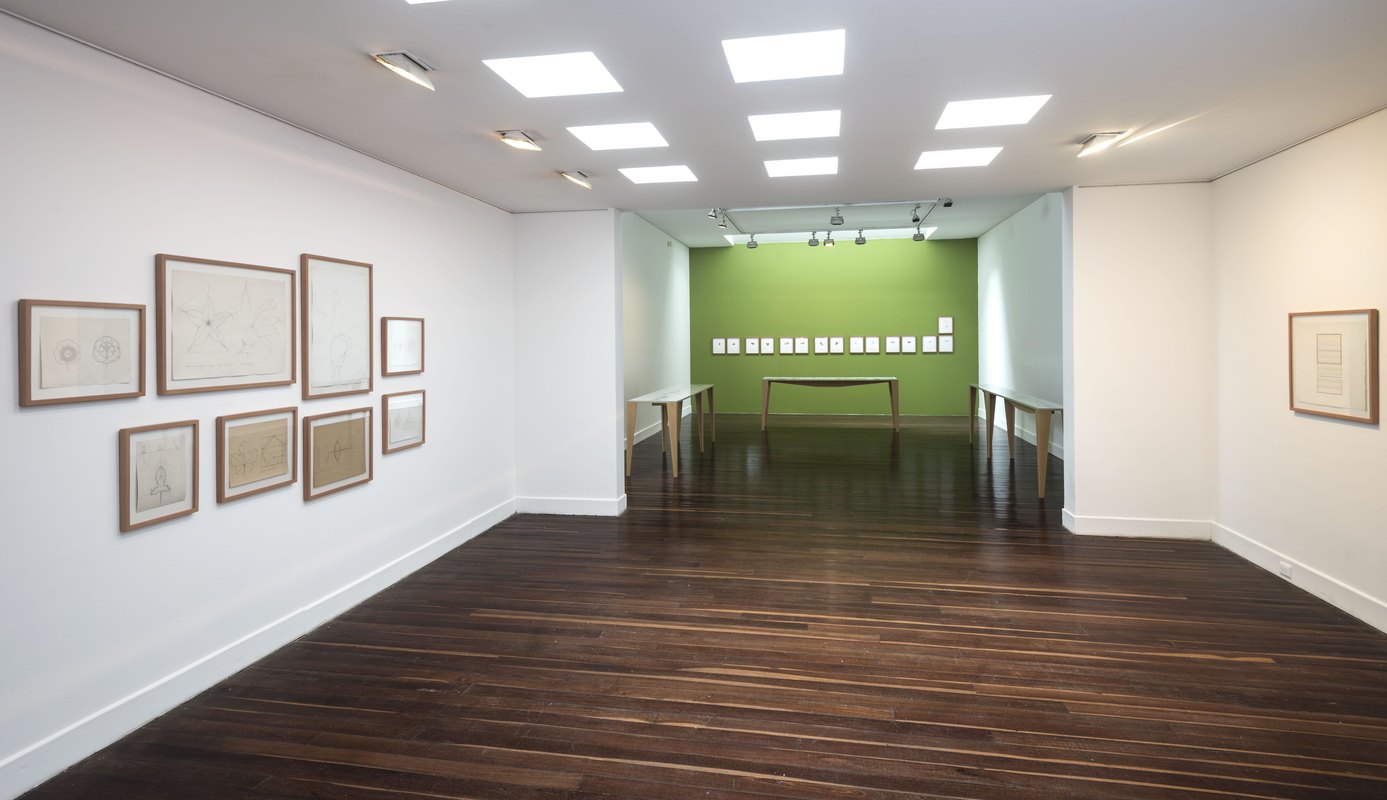 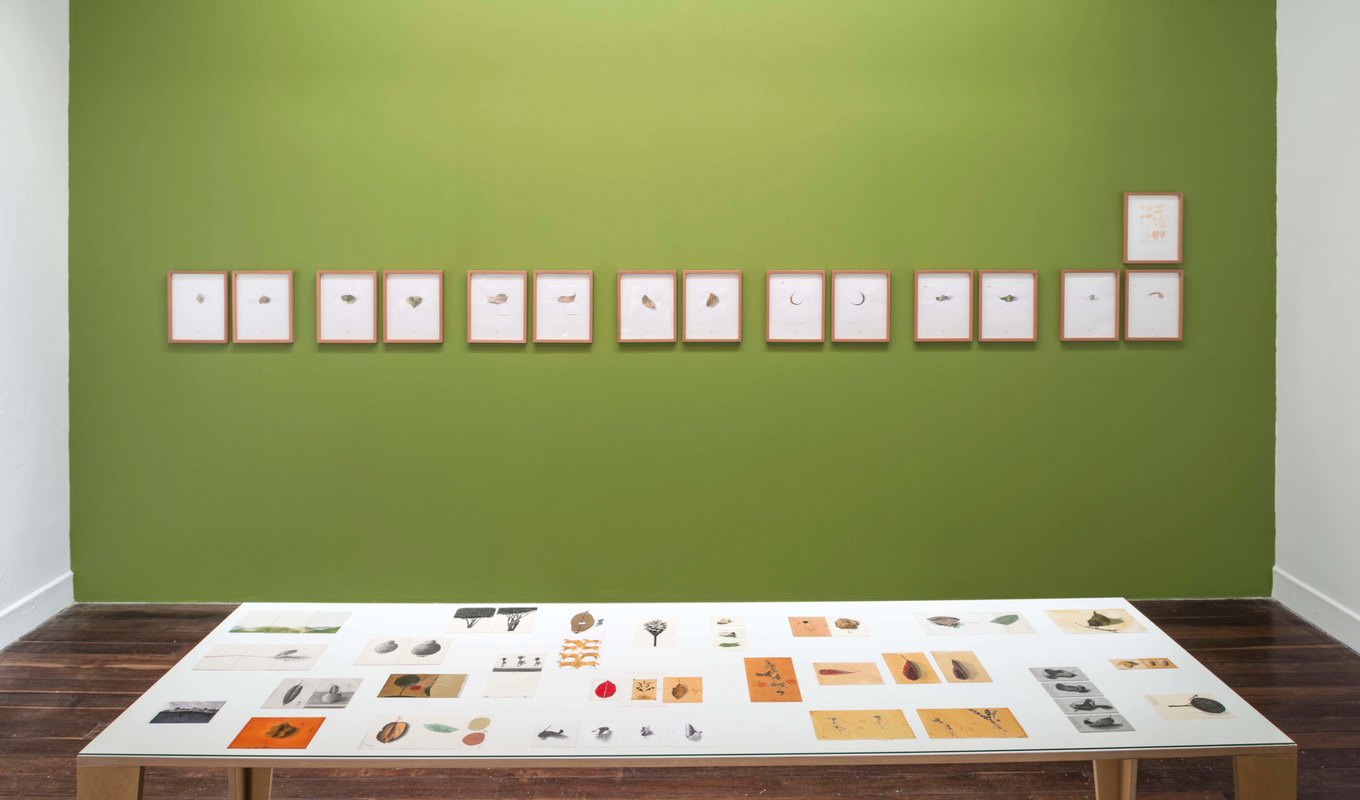 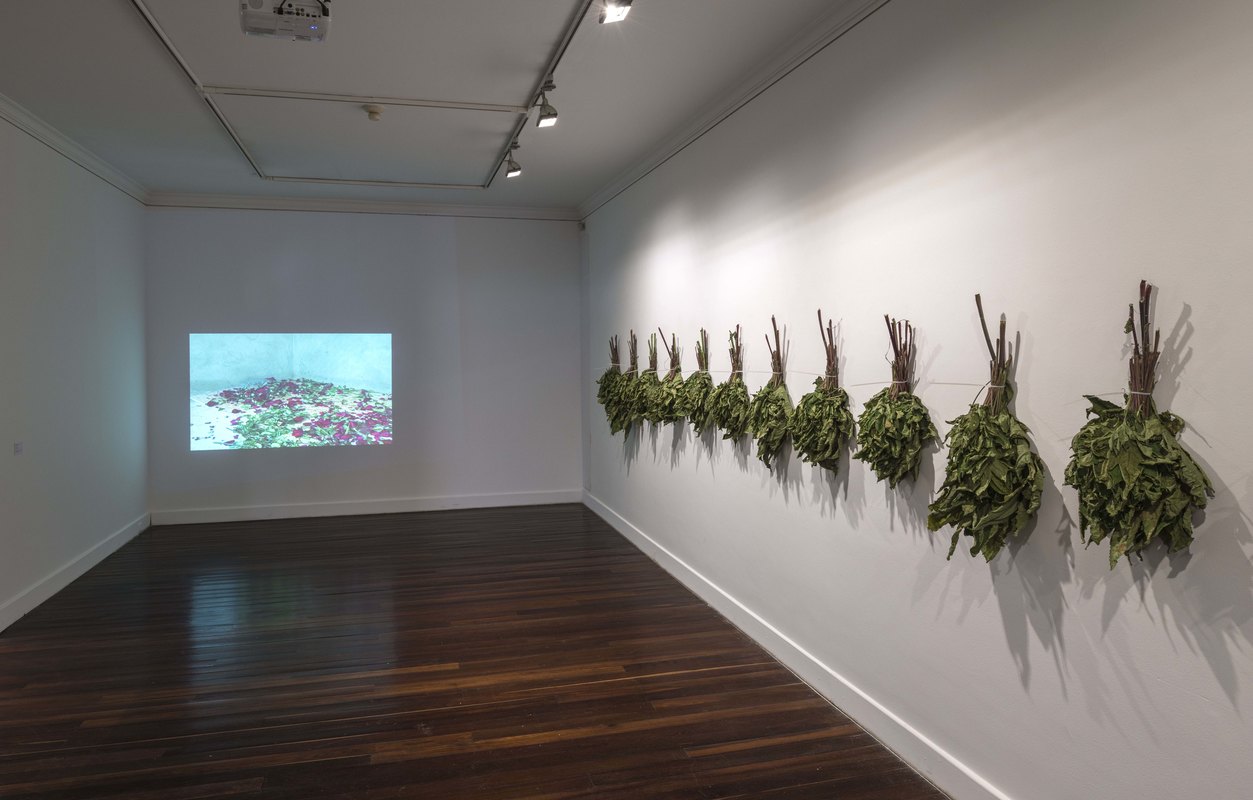 Casas Riegner is pleased to announce the opening of El Paisaje, las plantas y las flores (Lanscape, Plants and Flowers), the second exhibition of its new project TIMELINE. Gathering a selection of works by Carlos Rojas, Rosemberg Sandoval, Liliana Sánchez and José Antonio Suárez Londoño, the show articulates different views of nature and landscape, thus revealing their great value as visual and conceptual resources from which to address various ideas (spiritual, existential, material, socio-political, etc.). Following TIMELINE’s guidelines, this show rescues specific moments in the practice of these four artists exhibited for the first time in the context of the gallery. Furthermore, these snapshots have been articulated through the careful revision of each artist’s practice, with the intent of tracing conceptual crossings amongst them, while facilitating new readings of their work.

The interdependence between man and nature is undeniable. Since the beginning, the man-nature relationship has been marked by a mutual interaction: man affects nature with his transformative action and at the same time nature affects and changes his life in multiple ways. According to geographer Jay Appleton, the manner in which we transform, protect, and sustain landscape has a direct correlation to our own sense of landscape (whether natural or artificial). Thus, El Paisaje, las plantas y las flores is conceived as a space where different understandings of nature and landscape converge. In addition to these specific perceptions and realities, the works on display invite us to rethink our notions of “natural” and “landscape”, while also offering a series of sensitive and emotional experiences.

Rosemberg Sandoval understands the world through an artistic practice that embraces anonymity, marginality, instability and the use of raw materials. Always connected with pain and death, Sandoval’s work seeks to remind us of those events that are left out of Colombia’s official history. In Villa Pum-Pum, clusters of “higuerilla” or castorbean plant disrupt the white cube; the process through which he gathers these in marginal places near Bogotá (Tunjuelito, Granada, Soacha and Silvania), their strong scent and vertical disposition, form a landscape where cleanliness and poverty live in constant tension. The plant’s dualistic character is accentuated by the video Rose Rose, where the artist, all dressed in white, holds and wrings out dozens of red roses with their thorns, creating a kind of “cartography of pain” on his arms and hands.

A playful and attentive dog surrounded by owls, pineapples, watermelons, macaws and parrots, serves as the distinguishing feature of a tropical landscape made of popular objects gathered over time in an arts and crafts market. The objects progressively start to mutate in color and shape, as they assume more rounder shapes and their textures smoothen out. The evident transmutation and simplification of the natural-artificial world made by Liliana Sánchez is thus “an instrument of translation and domestication” that responds to the artist’s personal interest in exhe accumulation of objects of a certain kind to understand the world. world made by Liliana S all dressed in white, holds and yploring the accumulation of objects of a specific kind, as a model to understand the world. Continually appropriating recognizable elements that form part of our natural environment, Sánchez jumps from the familiar to the unfamiliar by using simple strategies— in this case, the change in color and shape—so as to challenge our ways of seeing and apprehending our surroundings.

Carlos Rojas was an artist for whom the contemplation of landscape, as well as the exploration of the geometrical structure underlying every phenomenon, was fundamental. He believed in geometry’s inherent power and its ability to lead us to truth, beauty and even God. Early on, the landscape and surroundings of Facatativá, the town where he grew up, instilled in him the desire to express himself through art. A selection of figurative and geometrical drawings completed in the 1960’s reveals Rojas’ interest in accessing the essence of flowers and plants, which he witnessed during the multiple hours he spent in the garden. In contrast, a sketch from the series Transparent Horizons (circa 1970) reveals Rojas’ perception of the natural landscape, translated into a system of horizontal lines, carefully placed over a surface to create color contrasts that allude to his memories and experiences of mountains and different Colombian territories.

José Antonio Suárez Londoño’s desire to improve his skills as a draughtsman, has led him to develop a practice centered on the systematic exercise of drawing. Self-imposed drawing tasks, rituals, thoughts, obsessions and dreams are recorded on small pieces of paper and notebooks. Around 30 etchings and 40 drawings chronologically displayed, reveal Suárez Londoño’s fascination with landscape, plants and flowers. His natural universe recorded in these miniscule works, is shaped by his observations, contemplations and long studies of nature; fragmented memories of Daytona Beach, a destination frequently visited by the artist, as well as a series of leaves picked up in his native city of Medellín are meticulously drawn on notebook pages and random pieces of paper. Likewise, roots, trunks and trees accompanied by naked fighters and primitive characters that seem to inhabit fantastical forests, spring from his astounding imagination informed by various literary and artistic sources.

Historian W.J.T. Mitchell stated that landscape is not an artistic genre, but rather a medium in which we live, move and establish ourselves as individuals. Far from being an inflexible and unalterable genre, landscape nowadays is a dynamic medium that can be appropriated for specific means. While Sandoval uses the castorbean plant and roses (infusing them with a strong socio-political character to touch on the subject of poverty in Latin-America), Liliana Sánchez uses popular objects that replicate a very particular notion of nature to explore different ways of understanding the world. Through the geometrization of nature expressed in figurative and abstract drawings, Carlos Rojas not only reveals his vast knowledge of nature and landscape, he also evidences his great capacity to synthesize experiences and observations. José Antonio Suárez Londoño’s somewhat nostalgic and fascinating micro-worlds, unfold his impressions of a natural world which he frequently connects with figurative elements that seem to be extracted from literature, art history and the world of fantasy.